During a meeting, some people can talk and talk and talk, and easily get off subject, causing you to go down ‘bunny trails’ (as they call them) of thought that aren’t relevant to the conversation.  This wastes time and tires the minds of those forced to listen.

At the begining of a meeting where you know this is going to happen (a repeat offender) say something like, “I’d like to try a new meeting technique I learned” (from an authoritative resource of course.)  Then explain that while each person is talking, you are going to diagram their conversation on a white board.

They don’t have to change what they’re going to say or pay much attention to it, but everyone will be able to see it.  Tell them that the purpose is to visually see the conversation so everyone can remember it better (which will happen of course, but the side benefit will be that it will affect what people say.  This is due, as you know, to the Heisenberg uncertainty principle which states that you alter the trajectory of a particle by trying to measure it, probably.)

Here’s how you do it.  If you’re familiar with mind mapping, that’s basically what I’m suggesting.

Try to capture the first subject out of their mouth in one word and circle it.  Then as they build supporting thoughts for that subject, draw lines to additional circled words underneath or around the original word.  If they begin to mention a subject that is not related, draw a long line to another space on the board and capture that subject in a word.  Then draw the supporting thoughts  of that new subject in a similar manner with closer lines and circle words.  Something like this. 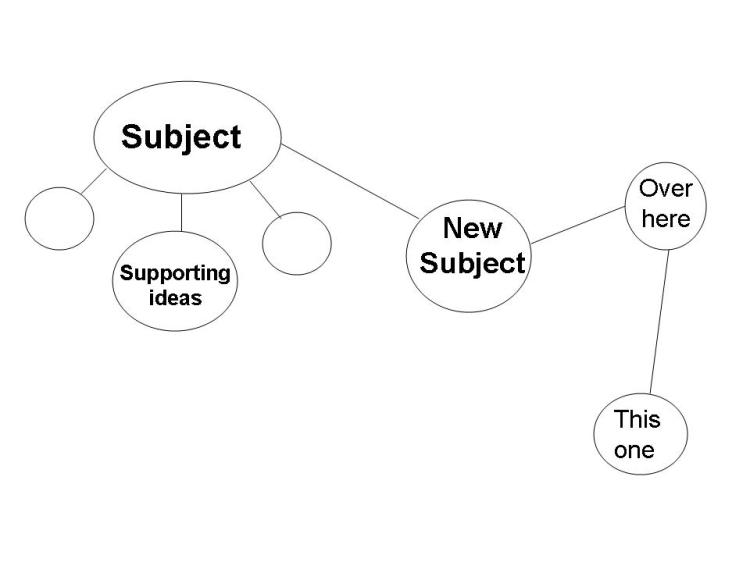 Of course it’s best if they can see it while they’re talking, but if they don’t, don’t say anything.  Just quietly diagram their speech for all to see.  And yes, how you draw what they are saying is very subjective, so use dramatic imagery as needed – big circles, long lines, etc.

This will surely improve communication because after each person is done talking, you can analyze their diagram and say, “Now let me see if I understood what you said correctly.”  And repeat back the main message you captured.  Of course, the bunny trails will be glaringly obvious, but habits are hard to break, so it may take a few times before the person is aware of their speech patterns.

Then again, maybe not.  You might just break them on the first try.

(and let me know how it goes. I’ve only done it in my mind because I’m usually in virtual meetings over the telephone, but I know I’d have some real doosies.)